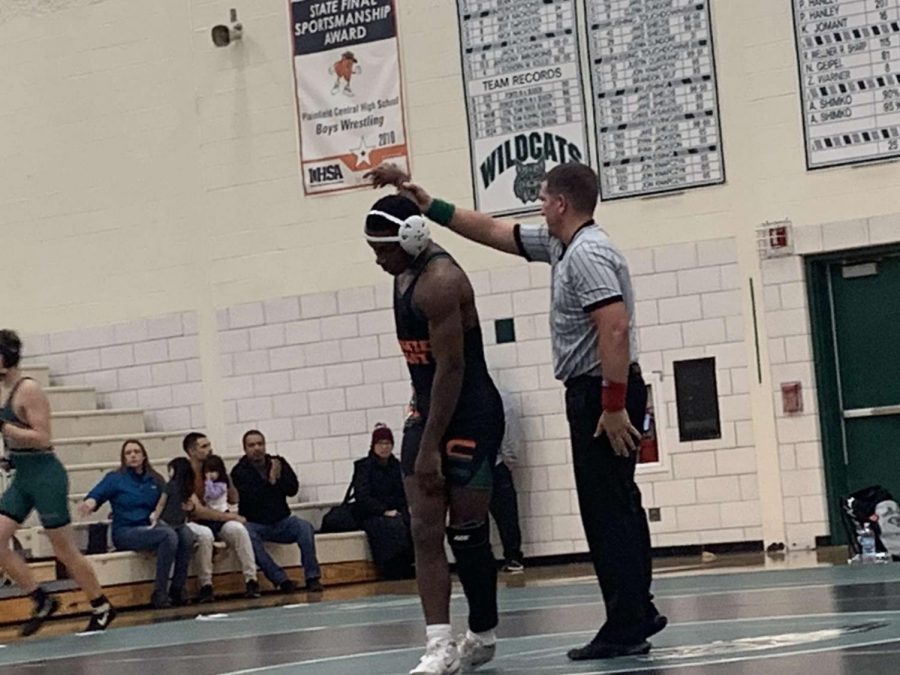 All lights low, with only two players on the mat; all eyes on the athlete. The pressure escalates.

Such adrenalin brings many players to wrestling.

At the Dec. 5 match, the athletes won against Plainfield Central.

“East was up by a lot and was winning a lot of the matches,” wrestler Marco Liace said.

Senior Jabril Sims and junior Thomas Manetti are among the winners in the Dec. 5 match.

Many athletes consider wrestling not only a physically demanding sport but a strategic one as well.

“Take every match as a win even if they lost because now they know what to do to prepare for the next match,” Antonio Romo said.

The athletes take on this demanding sport with ambition to overwhelmingly succeed with high goals.

Varsity player Tylahn Ladd said, “We push each other every day to make ourselves better.”

Many athletes, such as Ladd, said they have an ambitious goal to be undefeated this season, and they continue to have an attacking perspective.

The constant desire to continually better themselves not only impacts individual athletes but the team.

Many junior varsity players seek a position on the skilled varsity level. The team’s implementation of encouraging each other along with holding one another accountable has brought a history of great success to the program.

The team encounters many challenges such as injuries, self-evaluations, decision making, and weight management.

Coach David Early said, “Wrestling requires total lifestyle. To be a good wrestler, you have to be good at life.”

The disciplinary characteristic a wrestler possesses is not only portrayed through the sport and life but in school as athletes balance schoolwork, sports, and time. The satisfaction that a wrestler obtains after hard work and determination can continue to motivate them.

Ladd said, “I think of my goals [to motivate] and remind myself why I play this sport. I want a chance to compete more.”

Many wrestlers have plans to continue a wrestling career in college.

Ladd said, “Wrestling has taught me. I can do anything as long as I work for it.”

Athletes who have grown to not only love the sport and be passionate about it, also encourage those around them to take part.

Romo said, “I don’t regret this sport at all. If anything, I’ll call it the best decision in my life.”

The program prepares for the competitive Brawlatorium which will be held in Ohio in February. This tournament will feature challenging schools from Plainfield as well as neighbors Neuqua Valley, East Aurora, and Metea Valley.

Wrestlers take on the Cougars at Plainfield South on Dec. 20 at 6 p.m.