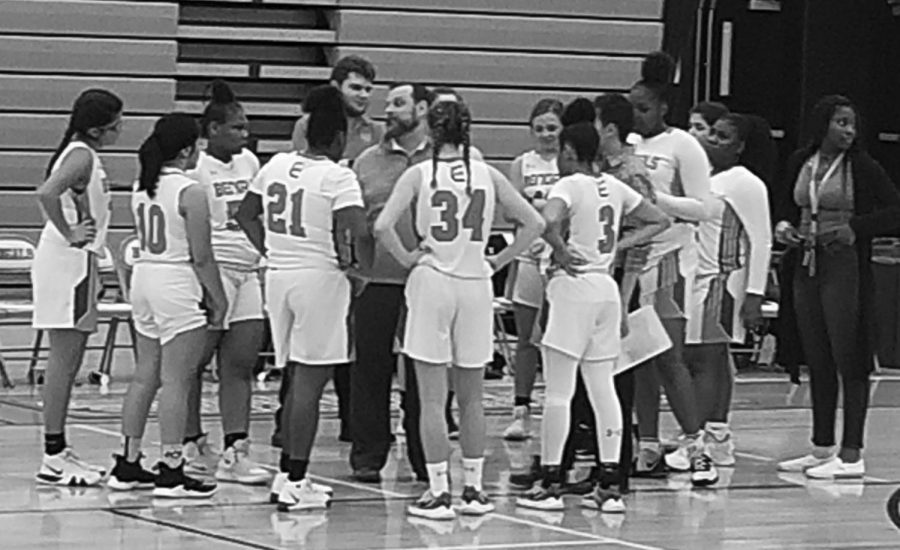 During the Jan. 9 girls’ basketball game against Minooka, tensions were high as players raced against the clock to push their score into the winning margin.
Coaches called for full time-outs for mid-game pep talks to secure the chance of winning and inspire their players.
Fouls were stacking on both sides and free throws were raising the score for both Minooka and East. The game reigned on down to the second, but East took the homebound win with a 56-52 victory.
“It is about bettering ourselves as basketball players and as people,” Coach Anthony Waznonis said.
The athletes might owe their tough win against Minooka to this growth.
“We’ve improved a lot over the summer,” junior Kaley “Nhim” Nhim said. “Our conference record is better already, and we’re only halfway done.”
Some players said they prioritize athletics and academics. Many stay organized and up to date by staying after school, and the coaches will adjust schedules to meet student’s needs.
“It’s really hard,” Nhim said.
“[But] the coaches are actually really nice about it and they understand. … They shorten the practices if they really need to,” Nhim said.
That does not mean the athletes should expect leniency.
“They also extend practices if we need to,” Nhim said. With a tournament on the way, coaches are making sure they stay on top of their sport.
It is a coach’s job to encourage and inspire their players, and crowds motivate plenty of athletes, so Waznonis does his best to get as many eyes on his team as he can.
“We try to move some of our games off of the boys’ games nights. … So, we can get more of a crowd there on those dates,” Waznonis said.
That is not all that is done to popularize the girls’ team.
Waznonis said, “We have three boys-girls doubleheaders. … The girls will play at 5 p.m., and the boys at 6:30 p.m. right after” at the same location.
Such an event forms a sense of community between the teams. After all, they are both here for the sport they love.
“I took it seriously around middle school. … I’ve always enjoyed the sport. … It’s always been a good, fun time for me,” Nhim said. “If I had the opportunity [to play basketball in college], I would definitely take it,” she said.
Sophomore Taylor “French” French enjoys the team bond with their love of basketball and “team breakfasts and dinners,” which French said has helped them “bond very well.”
Senior Tamia “T” Edom said, “My team has different personalities, and, when we work as a team, we are like one person.”
They have started the season strong. “I was pleasantly surprised, we really played a good game, and especially started really strong,” Waznonis said, recounting the girls’ game against Oak Forest.
“I don’t know that it surprised me that we won, the surprise was its the first game after Christmas,” he said.
“Our hope is that we win a regional championship. Beyond that … our goal is that when we look back, we know we’re better than when we started.” Waznonis said.
The players will play regionals Feb. 17 and 18.
With their strategy and dedicated players, it is possible they could indeed make it further than where they started.