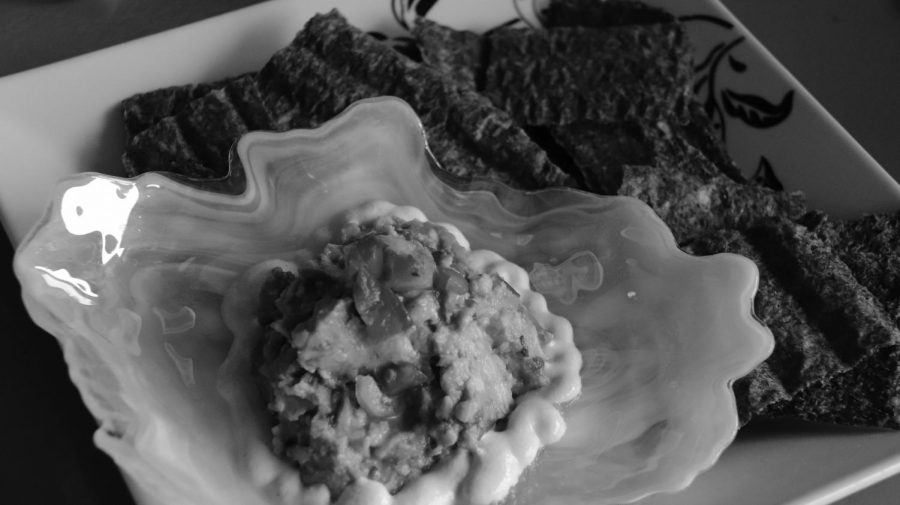 The casual eatery opened in 2010 with the focus of “celebrating life,” according to the café’s website.

Whether diners cannot tolerate gluten, have allergies, follow a vegan/vegetarian diet, or just consider themselves a foodie, the café will cater to needs.

The food is not prepared above 110 degrees. Dehydrators cook the food, so the items are served cold.

Prices for appetizers vary from $9.95 for six flatbread bites or cucumber rounds, to $24.95 for a sample platter that serves two to four.

Each entrée is served with fruit salad and a side salad with a choice of ranch, ginger garlic, or smoky BBQ dressing. There are daily specials served as well.

If unsure what to pick from their expansive menu, the café offers samples of most foods, so diners can taste-test a palate.

I really enjoyed how the café gave free samples, and it opened up my options.

As I walked into the warm environment, a chalkboard sign in front of the bar directly opened to the fridge and kitchen.

I sat among one of the olive leaf tables and began to attempt to decrypt the menu. The polite and friendly waitress was patient as I sampled a few items.

While we waited for the food to arrive, soft music floated through the café, a dim hum of the 80’s dispersing into the atmosphere. The restaurant was not crowded, and never gave the impression of a typical noisy restaurant.

For a lover of fries, the jicama fry takes a strange twist on the typical greasy potato goodness.

With a texture like water chestnuts, the sweet “fry” has a signature crunch that left me wanting more.

On the other hand, the jicama ravioli was a little bland, but tasted like cold Chef Boyardee’s. Instead try the tasty jicama take on the classic Italian dish.

The Vegan Café is a sit-down restaurant, but the food arrived very quickly.

The crispy corn and flax chips gave that crunchy, defined taste, but they were not overly salty. The chips paired with a delicious guacamole with a hint of mild Mexican spice and nutty sour cream.

Entrees came relatively quickly, and I caught a waft of sweet fruit mixed with savory spices.

The steak burrito’s tangy mushroom “meat” combined with sour cream and guac made a flavorful bomb of Mexican-style food, especially when paired with the chewy corn and flax tortilla.

The ginger-garlic salad dressing gave my side of spinach greens a kick, but it left a bad sour and spoiled after taste in my mouth.

However, the raw vegan twist on an open-faced hamburger had a distinct nutty flavor, and the creamy cashew cheese gave it a refined tang.

The eggless egg salad was a smooth and gritty paste piled onto a flatbread cracker that I honestly enjoyed more than real egg salad.

My side of fruit salad had a pleasing vanilla drizzle that added the perfect amount of sweetness to the apples and oranges.

The vegan take on Thai pizza had a nutty sesame crunch with just enough greens not to overpower the cashew cheese and flatbread crust. The crust was flimsy, and I’ll admit, it was a little strange eating cold pizza.

When dessert was served, I got a strong chocolate aroma from the cheesecake.

The almond butter pie had a rich and creamy filling that had a slight banana aftertaste with a thick and decadent crust. The chocolate sauce drizzled over it tasted like Hershey’s classic chocolate sauce.

The brownies were chewy enough with a cool and salty cocoa taste.

I really appreciated the friendly staff, and it made eating at an unfamiliar restaurant much more comfortable.

I will have to admit, it was a little strange at first eating cold and room temperature food.

Yet, I found each dish to be divine.

The way the food melted onto my palate and kept me wanting more made the experience worth the price.

I highly recommend the Vegan Café for a different kind of dining experience.